Explore the Natural Beauty of the Black Forest

With its cuckoo clocks and pine trees, gothic castles and evergreens, it’s small wonder Germany’s Black Forest has inspired so many fairy tales. This is the place where Hansel and Gretel came across the wicked witch, where Sleeping Beauty rested in eternal slumber, and Snow White escaped the clutches of the Wicked Queen with the help of seven dwarves.

While the Black Forest has become synonymous with these sinister children’s tales, there’s more to the Schwarzwald than the storied legacy of the Brothers Grimm. Bounded by the Rhine River, this vast forested mountain range is among the most scenic regions of Germany, marrying natural beauty with charming, time-forgotten villages. Add to that, an incredible history dating back to the time of the Celts, and the Black Forest emerges as one of the most exciting stops on an invigorating Rhine river cruise. If you’ve long dreamt of walking beneath the Black Forest’s ageless canopy, taking in the Germanic grandeur of this mighty woodland, Emerald Waterways can help get you there.

Our Jewels of the Rhine river cruise gives you the opportunity to take part in a guided nature walk through the Black Forest, stopping off at several points of interest along the way. This special excursion is part of the Emerald ACTIVE excursions programme, and combines an insightful tour with the chance to stretch your legs and get that ticker racing amid the scenic splendour of the Black Forest.

To give you a taste of what awaits during this unforgettable shore excursion, join us as we explore the natural beauty of the Black Forest, taking in some of its most beautiful landscapes and natural landmarks.

Titisee Lake, and its adjoining spa town, is one of the most popular spots in the Black Forest — and for good reason. Enveloped by a ribbon of forested mountains, this beautiful lake boasts an irresistible backdrop of pine tree woodland, dotted with traditional lodges, creating a quintessentially German backdrop.

The lake itself is one of the largest in the Schwarzwald, covering around one square kilometre. Its waters drain into the Upper Rhine between Tiengen and Waldshut, and thanks to its sheltered position, it’s a popular spot for outdoor swimming and boating.

Happily, Titisee’s banks are lined with hiking trails, making it easy to take in the majestic scenery. One of the best spots to enjoy panoramic views of the lake and its surroundings mountains is from the Hochfirst, a nearby hill complete with a special viewing platform.

Triberg Falls is, perhaps, the most beautiful natural landmark of the Black Forest. Tumbling 163m down a rocky ravine, this is the highest and most powerful waterfall in Germany, formed by the Gutach river as it makes its way towards the Elz and, eventually, the Rhine.

Rather than a single drop, Triberg features seven major steps, each with its own white water plunge pool. The bottom steps of the waterfall are the most impressive, and feature manmade viewing platforms where you can experience the ferocity of the fast-flowing river.

The entire descent of Triberg can be explored thanks to a series of stepped trails, which follow the route of the river as it plunges through the pines, providing a spectacular walking experience. Rising from the Upper Rhine Plain and stretching deep into the belly of the Black Forest, the Kaiserstuhl mountain range is a spectacular region for many reasons — not least for its Badberg Nature Reserve, a Designated Conservation Area that’s home to a number of rare plants, including wild orchids which blossom as far as the eye can see during the summer months.

Given its position straddling both the Upper Rhine Plain and the Black Forest, and close to the waters of the Rhine, Kaiserstuhl is renowned for its plentiful vineyards, which are visible on several hillsides in the region. Thanks to its volcanic soils and sheltered aspect, the Kaiserstuhl range has all the right attributes for grapevine cultivation.

Thanks to its gentle, rolling hills, the Kaiserstuhl is a popular spot for hikers, and features several scenic walking trails, including the north-south trail, a 16km route between Ihringen and Endingen, offering fantastic scenic views.

The Höllental is one of the deepest valleys in the Black Forest, so deep in fact, that travelling in the gorge’s narrow bottom can feel like being underground. This depth lent the valley its ominous German name Höllental, which translates as ‘Hell’s Valley’ in English. You won’t worry yourself over this menacing title upon seeing the valley for the first time, however - its scenic beauty is absolutely spectacular.

While most people experience Höllental by car, choosing to drive along the valley floor, there are some excellent walking trails on both sides of the gorge, making it easy to explore the landscape on foot.

One of the most popular trails in the Höllental region is the Jägerpfad, or ‘Hunter’s path’, which runs along the bottom of the ravine. With its gently undulating terrain, this is the easiest of Höllental’s hiking routes, and offers spectacular views of the Ravenna gorge viaduct.

The Black Forest’s Murg Valley is steeped in history, evident in the striking castles and fairy tale villages which litter the region. The valley takes its name from the Murg river, the main right tributary of the Rhine, which runs an 80km course through the Northern Black Forest, meeting the Rhine at Steinmauern, a town in the Rastatt region of the Upper Rhine Valley. 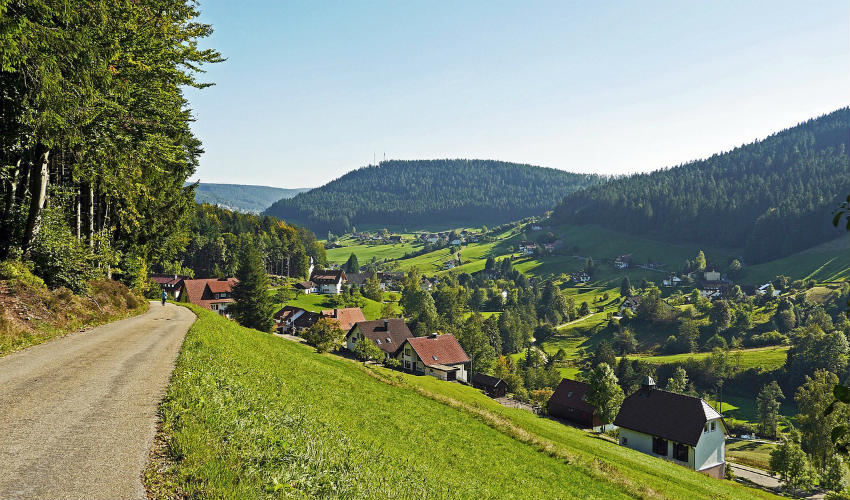 The valley itself is effortlessly beautiful, comprising of rolling, forested hills interspersed with traditional Germanic towns and villages. The region features a good range of hiking trails, which connect many of the region’s most popular settlements and offer a varied mix of terrains — from forested trails to riverside pathways.

One of the best-loved towns in the region is Weisenbach, whose historic wooden footbridge is one of the most iconic sights of the Black Forest. Demonstrating the awe-inspiring beauty of the region found waiting around every corner.

While our Emerald ACTIVE walking tour of the Black Forest doesn’t allow you to see all of the natural wonders listed here, we hope this guide has given you a feel for the spectacular beauty which can be experienced during this exciting walking excursion. To view our complete range of Rhine river cruises, click here or call us on 0808 159 6487. Darren Birch
Darren is Emerald Waterways' Marketing Exec. He's done a lot of traveling over the years, having once worked as an air steward. Darren's favorite river cruise destination is Vienna because of the rich culture and beautiful architecture.