7 Must-See Historic Sites Along the Rhône

Home to a selection of World Heritage sites, the world’s finest gastronomy, and acres of vineyards, every bend of the beautiful Rhône river is dotted with idyllic wonder. Flowing out from Lyon’s quaint charm towards the Mediterranean, its tranquil waters trace a path right through France, contrasting the country’s metropolitan liveliness with relaxing serenity.

Brimming with Gallic heritage and Roman history, the Rhône’s calm way of life belies many astonishing historic sites. Ancient villages, medieval cities and Roman ruins line its waters, offering a glimpse into civilisations and societies from long, long ago.

Showcased in Emerald Cruises' Southern France itineraries, let us guide you through this beguiling river’s must-see historic sites during your time here.

Dominating Lyon’s skyline, the impressive silhouette of Basilique Notre Dame de Fourviere looms magnificently over France’s second city. Lyon’s spiritual centre, the basilica was built at the end of the 19th century by architect Pierre Bossan, melding Romanesque and Byzantine architecture in a way that was considered a unique choice at the time.

Nicknamed the ‘upside-down elephant’ by locals due to its four surrounding octagonal towers, the contrast between its relatively unadorned exterior and the sheer opulence of the interior is simply awe-inspiring.

Its hilltop location also affords you spectacular views of the city, a sweeping panorama that inspires and invigorates the spirit. Here’s what Janine from The Good Life in France says about this incredible area:

“If you have the stamina, I would recommend climbing, but you can ride up on the famous funicular if you prefer (with a metro ticket). The locals call it La Ficelle, “The String”, and it’s one of the oldest funicular railways in France. The Basilica Notre-Dame’s white stone body gleams in the sunshine, topped by a golden statue. Enjoy the panoramas over Lyon from the terrace next to the Basilica or climb the 287 steps to the observatory if you dare. For a special experience, visit on a Sunday when there is a Mass you can attend for free."

While you’re there, take a jaunt around Vieux Lyon (Old Lyon), the city’s oldest district. France’s first site to be protected under the Malraux law – enacted in 1962 to conserve historical neighbourhoods – A Luxury Travel Blog had this to say about its charms:

“Not very long ago, it was deemed as unliveable but has been restored to its true glory and is today one of Europe's most extensive Renaissance neighbourhoods. It’s home to the Cathedral of St. Jean and some magnificent architecture from the 15th and 16th centuries. Enjoy a myriad of secret passageways as you explore this unique part of the city."

Finally, be sure to sample the city’s cuisine during your trip. Simple, but marked by distinct high quality, there are many, many reasons why Lyonnaise cuisine is regarded as one of the best in the world. 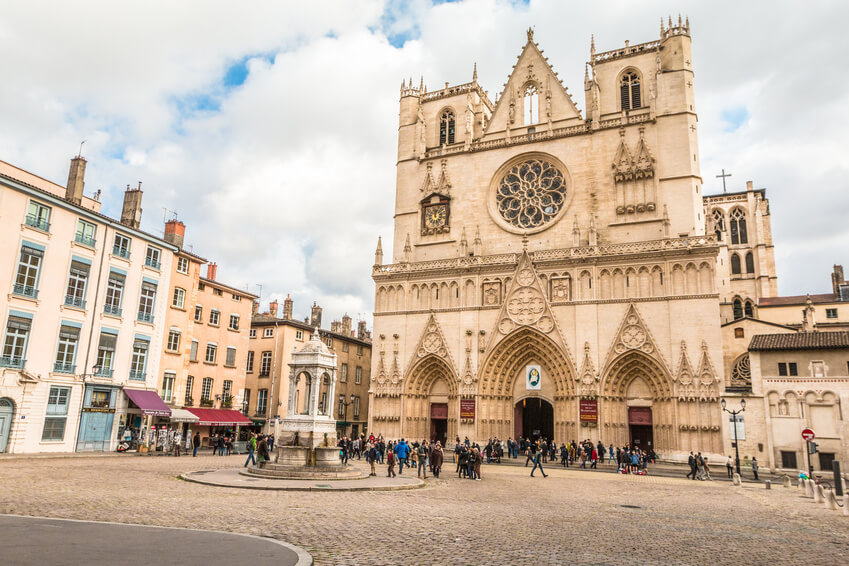 Brimming with a bounty of cultural riches, Avignon’s World Heritage-listed status makes it an essential part of any Rhône visit. One of the few French cities to have preserved its medieval ramparts, it’s a city whose historical reputation inspires at every turn.

The biggest gothic palace in the world, Palais Des Papes is a must see. With more than 25 rooms open to the public, it’s an illuminating experience that highlights the indelible impact its popes and leaders made during their time here. From the splendour of the Grande Audience Hall where hearings were held, to the Great Clementine Chapel’s awe-inspiring dimensions, every room here lets you experience the cultural influence and lifestyles of the papacy. Part of the same Historic Centre of Avignon that includes Palais Des Papes, the Pont D’Avignon remains a testament to the architectural mastery of the 12th century. Today, only four of its 22 arches stand, but its impressive size and intriguing origins make it a must see on your travels. Jordan over at Cruise Capital has experienced its wonder first hand, saying:

"It’s an iconic and must-see historical landmark on the Rhône, and even more impressive viewed up close as you glide along the river. According to legend, the bridge was built by a young shepherd - Bénézet - who heard the voice of Jesus telling him to build the first bridge across the Rhône. It was a remarkable feat of engineering at the time”.

A few miles from Avignon, the Pont du Gard stands as a pure historical spectacle. A World Heritage-listed site that’s remained largely intact, the sheer spectacle of this ancient construction inspires wonder in everyone who views it. We asked Laurel from  Unforgettable Trips for her memories of its stunning beauty:

“Gazing up at this 50-metre-high engineering feat, I was in awe. Hard to believe that it was built almost 2,000 years ago from golden blocks of limestone. It remains as the highest of all Roman aqueducts ever built and carried 200,000 cubic metres of water daily for fountains, baths, and homes in the nearby city of Nimes. What an incredible visual reminder of the Roman's knowledge and skill!" 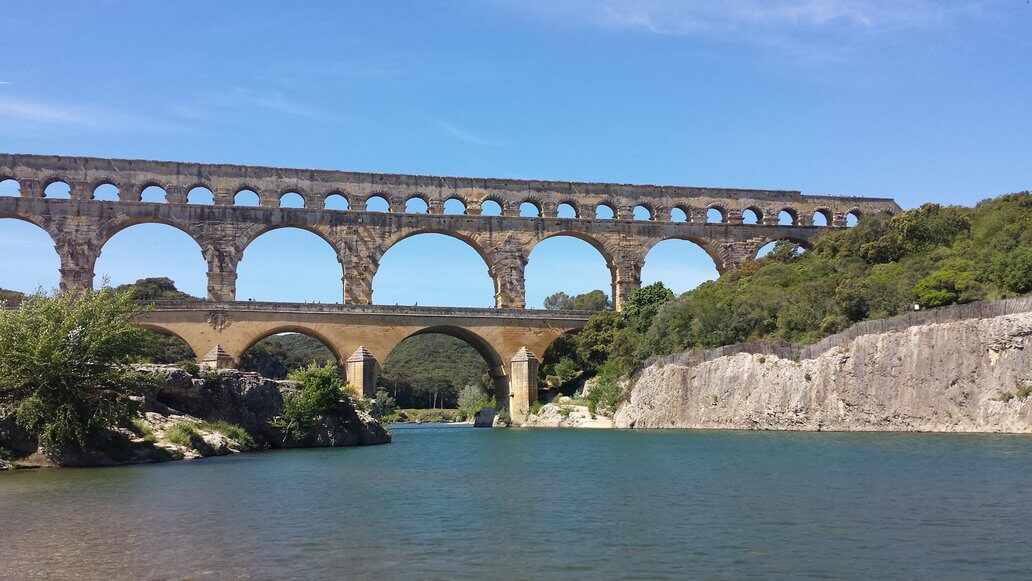 Home to Vincent van Gogh from 1888 until 1889, Arles’ historic and cultural identity enriches any Rhône jaunt.

Perhaps its most prominent tourist attraction, the Arles Amphitheatre was the site of white knuckle chariot races and fearsome hand-to-hand combat, entertaining over 20,000 spectators until the fall of the Roman Empire in the 5th century. Embellished with jutting towers that were added in medieval times, it’s another of the Rhône’s World Heritage sites that has to be witnessed on your travels.

Complete with a vast array of Roman monuments, allow Julie from the Provence Post to guide you through a trio of its most astonishing relics:

"In the depths of the Rhône River at Arles lies an incredible treasure trove of Roman artefacts. Three in particular now have pride of place in the fascinating "Big Blue" Musée Départemental d'Arles Antique. The first is the Arles-Rhône 3, an almost 2,000-year-old barge discovered in 2004.  The only intact Roman ship ever found, it still had its navigational equipment, cargo and kitchen [when discovered]. Built between 50 and 60 B.C. in Arles' famous shipyards, the boat is displayed in a purpose-built wing and classified as a national treasure.

“Watching over it is a six-foot marble statue of the Greek God, Neptune - protector of navigation and maritime commerce - which dates from the 3rd century BC and was pulled from the Rhône in 2007, broken into four pieces.

“The third is a life-sized marble bust of Julius Caesar himself, the oldest known representation carved during his lifetime. Recovered in 2007, the bust was restored, lent to the Louvre and finally returned to the MDAA where it remains permanently on view”. 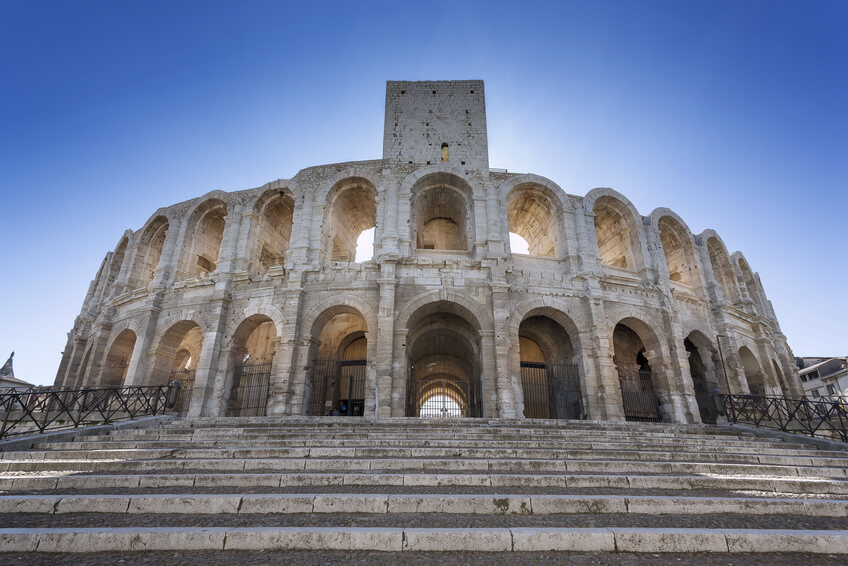 The Vineyards of Côtes du Rhône

Of course, we’d be remiss not to give mention to the Rhône Valley’s storied wine-producing history. Tara from Ladyhattan fell for its charms while there:

“The delicious Côtes du Rhône wine road — one of France's most engaging destinations, allows travellers to taste, smell and experience the best of France, including its wine! My favourite stop along the Rhône River is Chateauneuf du Pape, a village which lies in the heart of the Vaucluse region. Producing the premiere red wine of the world, you can't visit France without tasting a decadent glass of Pape in Chateauneuf du Pape". 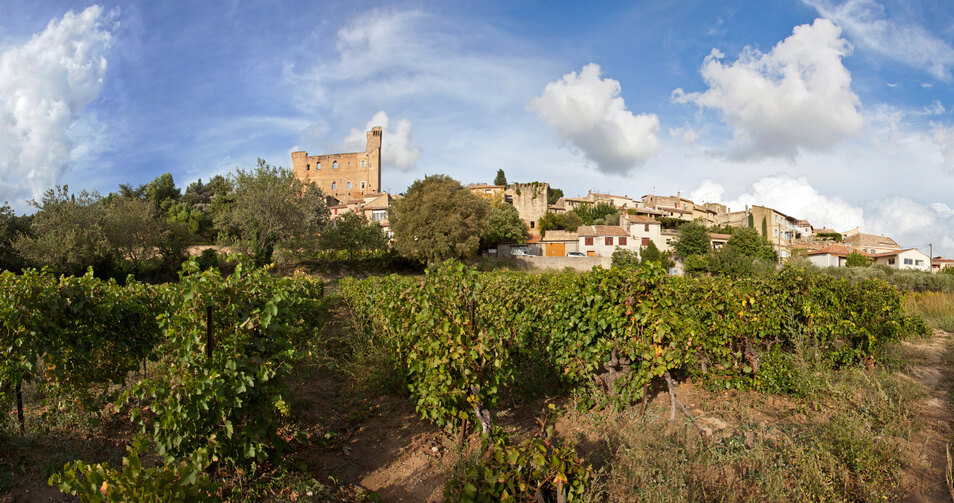 If this journey through some of the Rhône’s historic highlights has tempted you, click here to view our full collection of luxury river cruises on the Rhône’s waters. Or, if you need any further help or advice, call the Emerald Cruises team today on 1300 286 110.