Gothic Art and Architecture: The Movement Explained in 8 Works

Flying buttresses and humanist sculptures – the Gothic movement is responsible for some of Europe’s best-loved art and architecture.

The Gothic was an early art movement which changed the shape of Europe, formalising old traditions and paving the way for progress. Spawning from the Romanesque, the style took influence from Roman Catholicism and humanist ideals, inspiring the creation of Europe’s great ‘heaven-on-Earth’ buildings and their associated works – from Sainte-Chapelle to the Sceptre of Charles V. Given the sizeable impact the Gothic style had on the continent, here we look at some of the movement’s key facets and elements, and explore the Gothic art and architecture which you can experience as part of your European river cruise.

Emerging in the 12th century and lasting for a period of roughly 400 years, Gothic art was popularised through much of Europe, being particularly commonplace in France and Italy. Influenced by the proliferation of Roman Catholicism and cultural changes including the emergence of universities, the movement saw the introduction of naturalistic humanism to painting and sculpture, with figures, like the Virgin Mary, depicted in typical, everyday poses.

As the centuries passed, Gothic art borrowed from other cultures and traditions, specifically Byzantine and Romanesque. Regionality was also a key differentiator, with Gothic works in Italy being wholly unlike those in northern France and Germany.

Here are some of the Gothic artworks you can see on an Emerald Waterways river cruise in Europe.

The Bamberg Horseman is a Gothic sculpture which stands within Bamberg Cathedral, in the German state of Bavaria. Believed to date from the early 13th century, the stone sculpture is viewed as a classic work of Germanic Gothic, possessing all the qualities of the movement. The statue is roughly life-sized, with great attention to detail on both the horse and rider. The man’s identity has been a source of great debate for centuries, with some scholars reckoning that it could be a young Saint Stephen I of Hungary, or else Emperor Frederick II. Regardless, the sculpture is considered classic Gothic, with a humanist approach that came to characterise the movement. One of the great treasures discovered in the catacombs of Saint-Denis Abbey is the Sceptre of Charles V, which scholars agree was cast somewhere between 1364-1380. Depicting the revered King of the Franks Charlemagne, the sceptre, along with several other invaluable jewels, were commissioned by Charles V as gifts for the coronation of his son, Charles VI. The golden sculpture has several classic Gothic hallmarks, from the appearance of Catholic iconography, to the calm, human depiction of Charlemagne himself. The spectre is currently on display at the celebrated Louvre Museum, in the centre of Paris. Produced sometime between 1260 and 1270, the Virgin and Child is an ivory sculpture which stood in Paris’ exquisite Saint-Chapelle for centuries. Considered the most beautiful ivory sculpture ever made, the statue is a masterclass in medieval artistry, demonstrating supreme skill and talent for the age (though the artist remains anonymous). Though at first glance this piece may not look of the Gothic style, the humanist impression of the Virgin Mary, happily holding a small, smiling child, is typical of the genre. Like the Sceptre of Charles V, this beautiful work of Gothic sculpture can be found in Paris’ exemplary Louvre

Gothic paintings emerged later than Gothic sculpture, with medieval artists borrowing from other styles to contribute to the movement. The Lords of Montfoort, which hangs in Amsterdam’s incredible Rijksmuseum, is a 15th-century oil-on-panel artwork which is typical of the Gothic painting style. It depicts four soldiers, kneeling before the Virgin Mary in an act of prayer, with calm expressions on their faces. With helmets removed, their innocence is revealed, giving them a human quality which is characteristically Gothic. The knights are believed to the Lords of Montfoort, who died in the Battle of Warns in 1345.

Gothic architecture was the precursor to Gothic art, setting the foundations for a movement which would span some 400 years. Buildings designed in the Gothic style are characterised by their lofty vaults, flying buttresses, decorative tracery and stained-glass windows, all of which contributed to the overall objective of such designs: to create a heavenly environment in the tangible world.

Visit any Gothic building or vestige, and you’ll likely feel a sense of being dwarfed by your surroundings. Vast halls, towering spires and flying buttresses were introduced to inspire awe and scale, dazzling the senses and affirming the existence of higher powers.

Below, we explore a handful of examples of Gothic architecture which you can discover on the rivers of Europe.

Cologne’s towering cathedral is one of the great medieval vestiges of Europe, and among the world’s foremost Gothic structures. With its 150-metre twin spires, the cathedral leaves quite the impression, and is visible from most places across the city. The fact that the cathedral was built in the early medieval period is testament to the engineering prowess of the early Europeans, as well as their dedication to creating buildings in the image of heaven. Equally remarkable is that the Kölner Dom was one of few buildings in central Cologne to survive WWII.

The Church of Our Lady 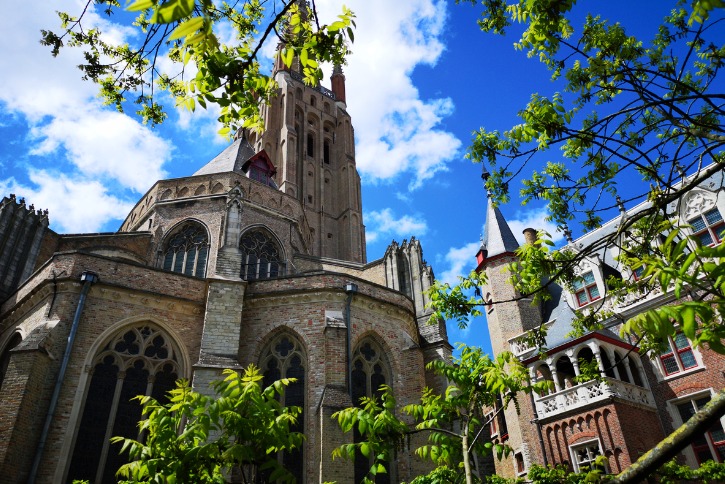 With its 122-metre brick steeple, the Church of Our Lady dominates the Bruges skyline, just as it has since the medieval period. Considered the crowning achievement of the Stonemason’s movement in Bruges, the church took two centuries to build, and is among the very best examples of Gothic architecture in northern Europe. While architecturally striking from the outside, it’s the church’s interior which makes it a true must-see. The Church of Our Lady is home to the prestigious Madonna and Child sculpture by Michelangelo, which was exported to Belgium in 1504. The ceremonial tombs of Mary of Burgundy and Charles the Bold also lie in the church, cementing it as one of the continent’s most highly-prized heritage sites The iconic symbol of Vienna, St Stephen’s is among the finest cathedrals on the continent, with a majestic spire and timeless Gothic design. At its highest point, the cathedral reaches 136 metres, which is heartily impressive when you consider that much of it was built in the 12th century. This truly is a Gothic structure designed to instil awe, from its decorative spires to its coloured roof tiles, as well as its huge chiming bells. Indeed, St Stephen’s is home to the second-largest free-swinging church bell in Europe, the mighty Pummerin, which can be heard across the city.

Easily the most recognisable example of Gothic architecture in the world; Notre-Dame de Paris is a classic of the movement, showcasing virtually all of the tropes you’d associate with the Gothic style. From its highly-ornate façade to its iconic gargoyles and sweeping flying buttresses, the cathedral is a masterpiece in Gothic design, and of the foremost architectural achievements of the Middle Ages. Given the complexity and scale of its design, small wonder Notre-Dame took some 200 years to build, beginning in the 12th century with the finishing touches added during the Renaissance.
The wonders of European architecture are yours to discover during an Emerald Waterways river cruise, with the continent’s waterways taking you from one iconic city to the next. For more information or to book your place on an upcoming itinerary, visit the homepage or call us today on 0808 274 6970.